n the important relationship between design fees and document quality. One notable exception is CSIRO, which is the Australian Commonwealth Scientific and Industrial Research Organization. Paul Tilley and Stephen McFallan of CSIRO conducted a survey program in the late 1990’s, on behalf of a coalition of Australian construction industry sponsors, who sought to quantify these relationships and their consequences. Their research was presented at a 1999 conference in Capetown, and published in 2000.

CSIRO surveyed contractors and designers, receiving 491 responses from architects and 327 from contractors. The study was designed to investigate changes in design and documentation quality over the previous fifteen years and to determine whether there is a causal relationship between reduced design fees and increased project costs due to a reduction in design quality, that could cause problems downstream in the construction process.

To ensure that the survey addressed only pertinent issues, two workshops – one for contractors and one for design professionals – were undertaken as part of the background investigation stage of the study. The workshops identified a number of design and documentation attributes as having a direct impact on the quality of design and documentation achieved, as follows (in order of importance): 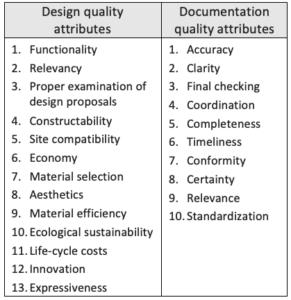 Survey results showed that both designers and contractors felt that the degree of incorporation of the design quality attributes had improved marginally over the previous 12‐15 years, with some exceptions:

To examine changes in design fee levels, designers were asked to indicate the project fee percentage required to provide a proper service, product quality design and documentation and make a reasonable profit for projects of differing sizes/price ranges and complexity over the specified time period.

The graph below shows that (according to designers) the level of design fees required to provide a proper service has only declined marginally over the previous 12 to 15 years, with the required level of fees for simple projects declining the most at just under 5%. These decreases in the required fee levels are most likely due to improved information technologies, which allow for improved efficiencies within the design processes. 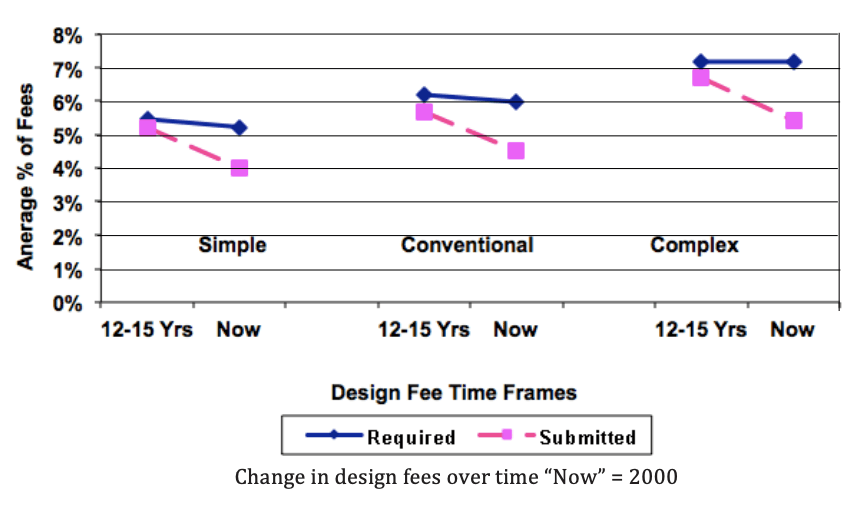 When designers were asked to indicate the fee levels needed to be submitted to actually win the work, the responses revealed an average decline of approximately 21% for all 3 project complexity levels over the previous 12 to 15 years.

Comparing the difference between the fee levels submitted now to the fee levels required now, responses revealed that the disparity between the 2 fee levels represented an average decline in real design fee income of approximately 24% for all 3 project complexity levels. It appears that the levels of fees being obtained are well below those required to provide quality design and documentation services.

Impact of reduced fees on design and documentation

Designers confirmed that the reduction in fees over the previous 12 to 15 years has directly impacted the quality of design and documentation. The responses indicate that lower design fees have had a highly detrimental effect on most design attributes, with the two attributes affected most being proper examination of design proposals and innovation.

Designers indicated that the reduced fees levels have detrimentally affected documentation completeness, certainty, coordination and final checking. These results correspond directly with the design and documentation quality attributes considered by designers to have declined most in the level of incorporation. Other significant impacts of reduced design fees include:

In the next issue of Project Management, I will present more of Paul Tilley’s research, which shows that construction costs increase significantly when documentation quality goes down.

I would like to thank Paul Tilley and CSIRO for use of the material provided in this article, adapted from a chapter in my 2006 book Managing Quality in Architecture.