In the last issue of Project Management, I wrote an article about Paul Tilley’s research in Australia that showed that design fees had dropped about 25% over a 15­‐year period, and that documentation quality suffered as a result. This article provides an overview of the second focus of the research, which was to determine if construction was affected by this drop in design fees.

Impact of design and documentation deficiencies

Construction process efficiency is affected by the occurrence of non-‐desirable elements of construction, such as rework, variations (change orders), cost overruns, extensions of time, program delays, contractual disputes and requests for information. 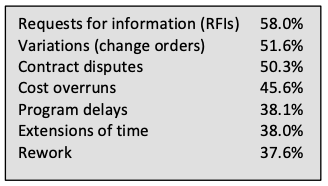 To determine the extent to which design and documentation quality influences project cost and time at tender stage, contractors were asked to indicate what allowance – either negative or positive – would generally be incorporated within their tenders, based on differing quality levels. The results:

As can be seen above, when design and documentation quality is considered to be very poor an average of just over 11% was added to both the estimated project cost and time allowance. Even when the standard of quality is considered normal, an additional allowance of approximately 2.5%, on average, is included. However, at the other end of the scale an average reduction of over 1% in the tender allowances is given when design and documentation is considered to be of an excellent standard.

The survey results indicate that all sections of the industry agree that there are major problems with the design and documentation process in the Australian construction industry, and that these problems are leading to construction inefficiencies and increased project costs. From a contractor’s perspective, the deficiencies occurring in design and documentation were steadily increasing over the previous 12-­15 years, and are causing corresponding increases in inefficiency in the construction process, resulting in decreases in project quality and increases in overall project costs.

Designers, while also acknowledging this reduction in design and documentation quality and services, consider the primary causes to be reducing design fees, decreasing project design and delivery times, and an increasing number of clients with unrealistic expectations and an inability to properly define project objectives and requirements. Both contractors and designers noted the increasing use of junior and inexperienced staff to carry out design functions. Designers suggested that this was a direct result of reduced fees and inadequate design time, limiting the type of staff available and the extent of supervision and in-house training provided.

By reducing design fees to minimise costs, clients and developers were, by their own actions, contributing to the problems that lead to inefficiencies in the construction process and increases in overall project costs. The results of the surveys clearly show a need for clients and developers to allocate adequate funds and time to the planning and design phases of a project, in order to maximise construction process efficiency and minimise overall project costs.

The conclusions here are inescapable: Shaving design fees simply doesn’t make any economic sense. Yes, one could argue that these results are based on perceptions rather than ‘facts’ – but the solid evidence is that contractors price the projects according to the quality of the documentation.

Let’s take, for example, conventional construction. The consensus is that (on average) fees of about 6% are needed to carry out an adequate design and documentation, but designers can only get, on average, 4.5%. In simple terms, they can only do about 3/4 of a complete set of documents. One could reasonably conclude that this would result in either a ‘poor’ or ‘very poor’ result from the contractor’s perspective – which according to them, would raise their costs and their prices by about 7 to 11% – and take a similar longer period to complete. This for a saving of 1.5% of construction cost in fees!

Similarly, paying the designer enough to get an ‘excellent’ set of documents (and giving them enough time to do so) will return both cost and time savings about equal to the difference in fees.

You can use this information to have a discussion with some clients about the benefits of providing adequate funds and time to prepare adequate documentation, and to not believe competitors who promise the impossible. You can keep accurate records of the real costs to prepare quality designs and documentation, and build a file of this information to support your negotiations.

Finally: I do not think this is a uniquely “Australian” problem. I’m very confident that similar studies done elsewhere would yield similar outcomes. We should KNOW – and we don’t.

I would like to thank Paul Tilley and CSIRO for use of the material provided in this article, adapted from a chapter in my 2006 book Managing Quality in Architecture.